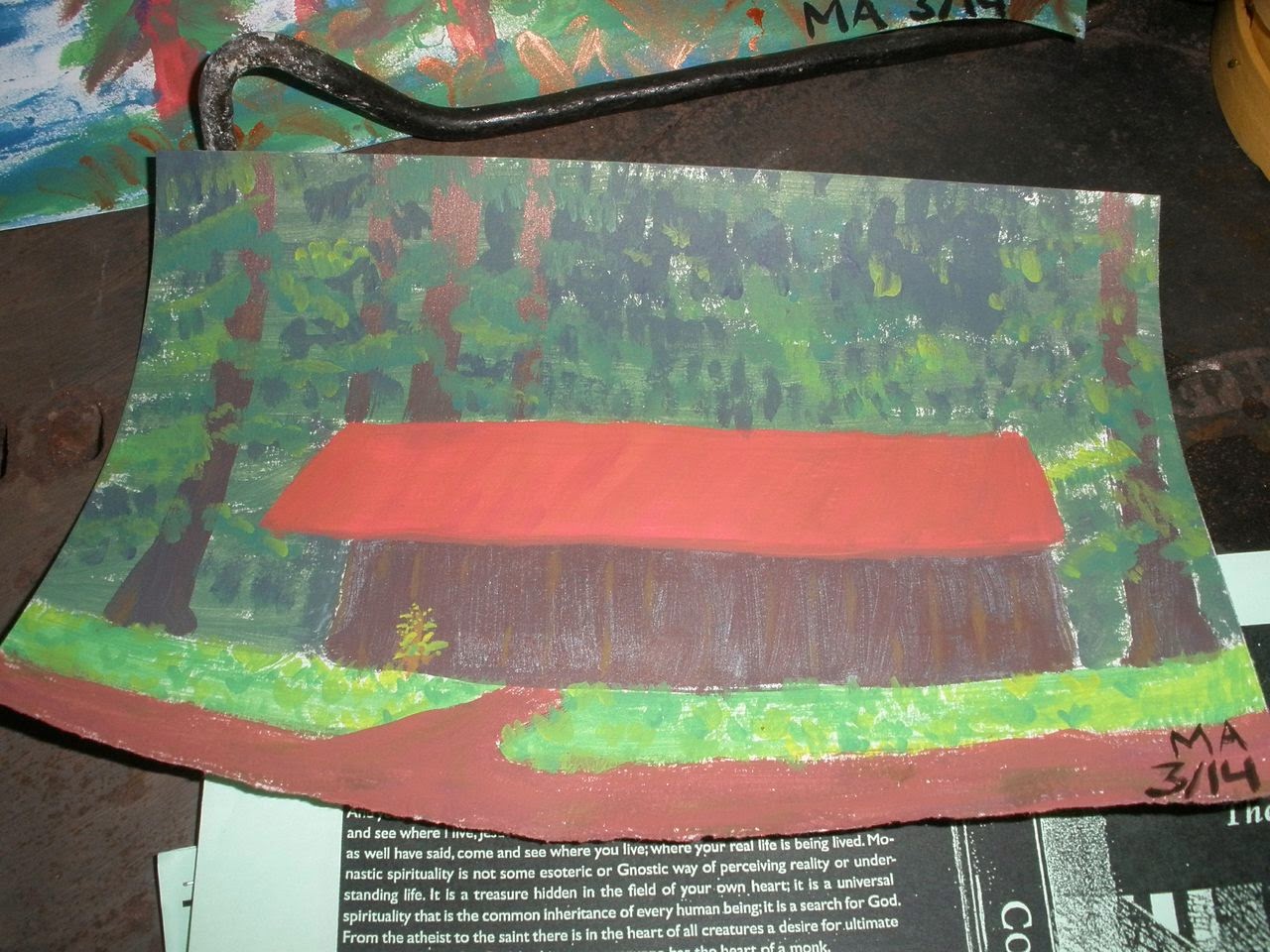 The Ignatian Center of Santa Clara University, as part of the mission of the Jesuit Higher Education, sponsors Immersion experiences for students to places with special needs.  Santa Clara's website explains the purpose of Immersions:
“These mutually enriching programs provide students with the opportunity to experience different cultures and diverse socioeconomic environments and to witness firsthand the challenges faced by marginalized communities.”
Usually places such as the inner city and poorer parts of world are chosen to host the students.  Last March, Santa Clara tried a new kind of Immersion and sent 10 students and 2 team leaders to Redwoods Monastery: a very different kind of marginalized community with a very unique culture (Cistercian monasticism based on the Rule of St Benedict) and an interesting socioeconomic environment. (We live by the work of our hands and own no property.)
The sisters at Redwoods entered this project in faith and not without some trepidation.  We knew that the students were both men and women between the ages of 19 and 22, representing variety of cultures and a wide range of backgrounds, interests and academic disciplines.  Some majored in biology, math or engineering;  others in computer science, theology or political science.
But the students were not unprepared for monastic life.  They had spent months before hand with staff at the Ignatian Center learning about monastic and church history, monastic practices and prayer.  By the time they arrived at Redwoods, they constituted a well-formed community ready for their week immersion experience.
One of the first group activities was a tour of the monastery.  Sr Claire and I lead the tour and pointed out a redwood with a ten foot long scar across its trunk. I told them the story of how the previous owner of the property, Bob Usher, had saved this redwood tree in the late 1940's.  As he was driving by one day, he heard the loggers sawing and told them to stop - that he was buying the property.  Bob a lover of trees and God eventually gave the property to the sisters for the construction of the monastery.  On hearing this story, one of the students said, 'I feel like hugging this tree.  Let's all do it.'  And so began the Immersion…
This image of 12 young people, connected, hugging an ancient tree (1600 years old) became icon for the Immersion. The redwood would have been a small seedling when the first monasteries were built in the West and later a towering tree when St Benedict wrote his Rule.  And now in the 21st century, these young people were open and enthusiastic, embracing a tradition centuries old just like they embraced the redwood.
The week of Immersion was marked by a somewhat rigorous monastic schedule of early rising, prayer and meditation, liturgy of the hours, lectio, conferences, work and meals.  In choir our voices soon blended into a steady and full stream of chant as the liturgy of the hours provided the basic structure of our day and the rhythm of our prayer and our community life.  Our guests arrived to choir on time and participated fully at each 6 hours of prayer.  No small task, even for seasoned monastics!
Lectio divina (close and prayerful reading of scripture) was done in common after breakfast for an hour.  Later in the morning, conferences were given by the sisters and the Immersion staff. One of the most impressive aspects of these students was their ability to read scripture with an open heart and cut to the meaning of the passage, applying it to their personal experience.
In the afternoon, the students tried their hand at manual labor done mostly in silence.  There were some very impressive and dedicated gardeners among them who helped Sr Ann Marie with weeding and vegetable bed preparation.  Others spent their time in the kitchen, diligently cracking nuts with Sr Victoria.  Another group worked in the redwood grove collecting fallen limbs and trimming huckleberry bushes while enjoying the beauty of these ancient giants.  Finally, a group of young men cleaned hard to reach places in our monastery.
Was the week of Immersion beneficial?  Absolutely.  For that week, the size of our monastery doubled.  We were exposed en masse to a group of young people who were remarkably responsive and accepting of our way of life.  They seemed to naturally fall into the rhythm of monastic life without losing their spontaneity or zest for life.  It gave us hope that monasticism can still be meaningful to a new generation of adults.
The students also seemed to benefit from the Immersion.  Before they left Redwoods, they told the sisters about what affected them most during their stay.  Some spoke of their personal experience deepening in prayer or meditation and self-knowledge.  Others felt that the Immersion helped them to reevaluate important relationships.  They also discovered that being alone and being with oneself was not 'lonely' but made them calmer and more self-assured. Without cell phones, internet and school and social pressures they experienced “rest.” (In the monastic tradition this is known as “quies.”)  Jowy, a musician in the group, reflected that without rests, there could be no music.

The importance of the Immersion was its reciprocity. Both groups, the sisters and the students, grew from the encounter and the embrace.  We accepted each other and formed a unique ecclesia in the Redwoods.

May 01, 2014 Back to Lectio Divina
Latest Blog
Unknown