PALM SUNDAY OF THE PASSION OF THE LORD 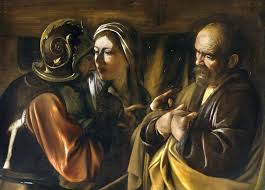 Caravaggio
Rembrandt
Even though all should have their faith shaken, mine will not be.(Mk 14:29)
I have before me two pictures; one a picture postcard, the other in a book. Both depict Peter’s betrayal of Jesus: a Rembrandt and a Caravaggio. The former hangs at the Rijksmuseum, Amsterdam; the latter in New York at the Shickman Gallery. I’ve had the privilege of seeing both in person at special exhibits in other cities.
I brought out the pictures while reflecting on Peter and what it must have been like for him to walk with Jesus for so long yet still manage to deny him, not once, but three times. This is Peter who made his profession of faith: ‘You are the Christ, the Son of the Living God’ (Mt 16:13-20; Mk 8:27-30; Lk 9:18-21). This is Peter to whom Jesus entrusted the keys to the kingdom of heaven.
Both works have Peter, the maid, and a Roman soldier. What attracts me in Rembrandt’s portrayal is the background—there in the shadows is Jesus, hands bound behind his back, body facing away from Peter, with head turned to watch Peter—Jesus stands silently and calmly seeing it all. In the foreground, the maid, in Peter’s face: ‘You too were with the Nazarene, Jesus.’ Peter, with a regal appearance and creased brow, looks at ease to reply, ‘I neither know nor understand what you are talking about.’ In Caravaggio’s work, the maid and the soldier point fingers at a scruffy Peter. The maid tells the solder, ‘This man is one of them.’ Peter looks troubled and guilty, pointing at himself while denying Jesus a second time. Both artists combine elements of darkness and light to enhance the scene.
For further insight, J. Gribowich compares Caravaggio and Peter, speaking to all of us in the brokenness we share with Peter: ‘An innovative and daring painter, Caravaggio was a darling of both aristocracy and the clergy who ultimately could not get a handle on his passion. Peter, a man also filled with passion and zeal, stumbled when that passion meant persecution and possible death. Both men belonged to the truth because they each knew their particular vocation; however, their weaknesses prove that human frailty can only be overcome by uniting one’s self to the Passion of Jesus Christ’ (Magnificat, Holy Week 2018, p. vi).
Sometimes we are so sure about something, remarking, ‘I will never…’ Fitting is the saying, ‘never say never.’ We can be the Peter in both pictures. We find ourselves in a bind, threatened, guilty, afraid. It may easy to say how we would act in this situation—we know the story. On the other hand, I’m not so sure I would be on the up and up. It is too easy to forget how weak we can be. What do you think you would have done if in Peter’s situation? What is your response when facing similar situations today? In our brokenness and fragility, with humility and strength, let us unite ourselves to the Passion of Jesus Christ.
PETER REMEMBERED THE WORDS THAT JESUS SAID TO HIM,‘BEFORE THE COCK CROWS TWICE YOU WILL DENY ME THREE TIMES.’PETER BROKE DOWN AND WEPT.(Mk 14:72)
‘At the name of Jesus every knee should bend, of those in heaven and under the earth,and every tongue confess that Jesus Christ is Lord, to the glory of God the Father.’(Ph 2:10-11) 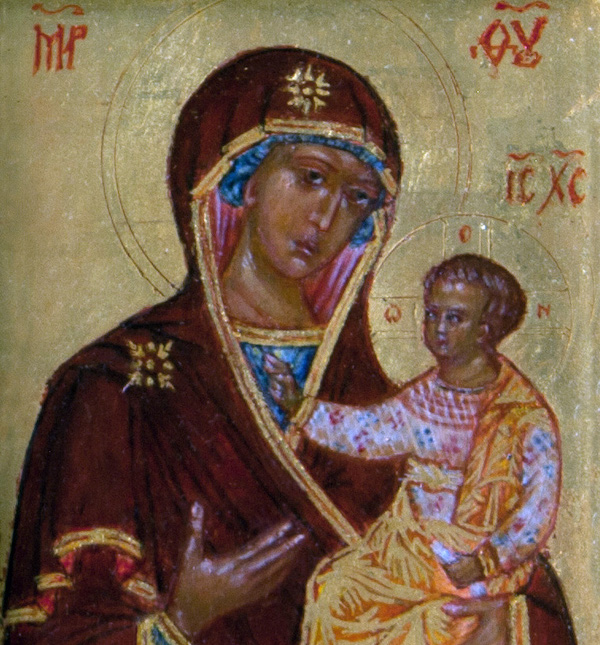 The Solemnity of Mary, the Mother of God

New Years Day in the Catholic liturgical season (the Ro...