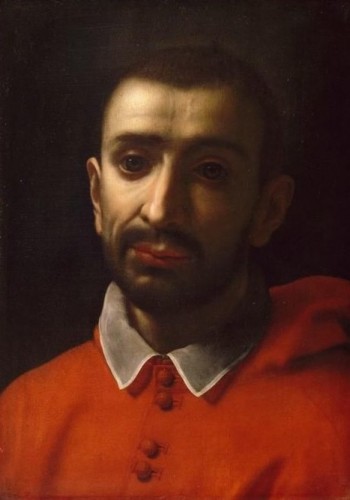 First Saturday of the Month
Readings of the day: RB 28Mass: Romans 11:1-2a, 11-12, 25-29; Resp. Psalm 94; Luke 14:1, 7-11
Charles Borromeo—a busy man! I am reminded of my daily commutes a piedi to school while studying in Rome. My route serpentined through the narrow streets and alleyways of the city. On Via di Ripetta I motored past the giant statue of Saint Charles Borromeo located in front of the apse of San Carlo al Corso, one of several churches in Rome dedicated to the great saint. This doesn’t mean I didn’t pass by without giving Charles a wave! Not idle, Charles received the clerical tonsure at the age of 12; he was a Doctor of Canon and Civil Law; his uncle was Pius IV; he guided the last session of the Council of Trent. Charles was a reformer in matters of liturgical music and clerical abuses “removing ignorant and unworthy clergy” while founding seminaries for clerical education. As Archbishop of Milan, Charles “started by adopting a very simple standard of living and giving away to the poor much of his considerable revenue.” A pastor, Charles provided relief to victims of famine and plague. Charles was “tireless, energetic, always on the move, he was worn out by the time he was forty-six.” Charles died November 3, 1584; he is buried in the cathedral at Milan. (For reference, see D. Farmer, The Oxford Dictionary of Saints, 59-60).
Everyone who exalts himself will be humbled,but the one who humbles himself will be exalted.


SAINT CHARLES BORROMEO,PRAY FOR US.